At first, you might not think that a social networking site and writing, specifically creative writing, can go hand in hand, but after reading this you’ll see how it’s possible. Now, I’m not talking about posting on Twitter about your upcoming book or trying to find publishing agencies through #PitMad. Rather, I’m talking about how crafting a tweet can make you a better writer. Curious to see how? Let’s get started!

When it comes to crafting a tweet, you only have 280 characters to get your point across. Remember, characters include letters, punctuation, and even spaces, not to mention any hashtags that you’ll be using. This means that you have a seemingly microscopic space to say whatever you have to say.

Let’s turn to my favorite band, Queen, to see just how many 280 characters is.

Mama just killed a man,
Put a gun against his head,
Pulled my trigger, now he’s dead
Mama life had just begun,
But now I’ve gone and thrown it all away
Mama, ooh,
Didn’t mean to make you cry
If I’m not back again this time tomorrow
Carry on, carry on
As if nothing really matters

As you can see, 280 characters provide hardly enough space to squeeze the whole first verse into one tweet.

OK…but how do Twitter and creative writing go hand in hand exactly? 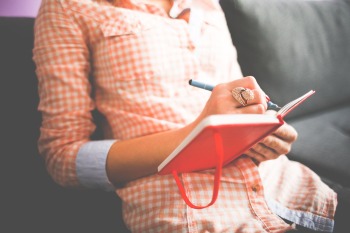 Well, the answer is simple. Twitter helps teach writers how to be concise with our words. If when crafting a tweet you get too wordy, oftentimes you lose the meaning of the tweet altogether, making said tweet to get lost among the estimated 500 million tweets sent per day.

Need more context for you? That equates to roughly 6,000 tweets sent every minute. With all these tweets being sent, tweets that don’t get their message across will easily get lost in the sea of tweets.

The same can be said about your writing.

When you’re crafting your next poem, short story, or novel, try and keep your writing as clear, concise, and attention-grabbing as possible. Let’s take a side-by-side look at an example of wordy, pointless writing compared to something that really grabs your attention.

Here’s an example I came up with for a wordy paragraph that could be edited down to make it stand out more.

Footsteps rang down the empty void of a hallway. The man knew that someone was coming down, he just didn’t know who it was. Since only a handful of lights illuminated the hallway it seemed dark and ominous. Other than the minimal lights, nothing stood out in particular that made him feel uneasy, but either way, the hair on the back of his neck stood up tall. Something just didn’t feel right. He felt the urge to run. He wanted to run, but where would he run to? He was at a dead end.

Now, here’s the edited version that removed unnecessary prepositions, redundant expressions, and other words that have no real substance to your copy.

Footsteps rang down the voided hallway. The man knew someone was coming, he just didnt know who. The hallway was dark and ominous. Nothing stood out that made the hair on the back of his neck stand up, but something didn’t feel right. He felt the urge to run…but where? It was a dead end.

The edited version, on top of being a quicker read, adds a sense of urgency that’s beneficial, especially for this type of piece.

How to Make Your Copy More Concise 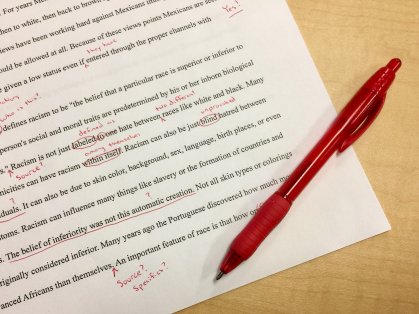 The best way to edit your copy to be more concise, and therefore stand out, is by scanning for unnecessary words. Some words that you can immediately eliminate without affecting your sentence structure include just, even, also, and that.

You can make easy edits to your copy that removes extra words, too. Edit words like all of –> all, remove words like in particular and of course, and always check for redundancy. Sure, this is a tedious process, but your future fans will thank you for it later! Plus, once you get familiar with this, you’ll be writing without these extra words in no time at all.

Sure, Twitter and creative writing don’t directly go hand in hand, but when looking at being a concise and to the point writer, Twitter can teach you a lot. And, just like standing out among one of the 500 million tweets sent every day, you want your copy to stand out from the other 5,000 some books published daily, too.

So, go back through your current draft and check for some ways you can be a more concise writer. You’ll see it’ll do wonders for your copy!

2 thoughts on “What Twitter can Teach You About Writing”