Knox and Kaela remembered hearing stories from their grandmother when they were kids about a world beyond the walls. Their parents, like all of the other adults, denied the existence of a world other than Austerity. But the siblings knew there had to be something other than the fake utopia they were living in; they were determined to learn the truth for themselves. With that, they set out to make a plan.

They knew that the wall that surrounded their city was under constant surveillance. There was no way that they’d just be able to walk out of Austerity. No, they knew they had to think up another way to plan their escape. That’s when they looked to the sky for their answer out. 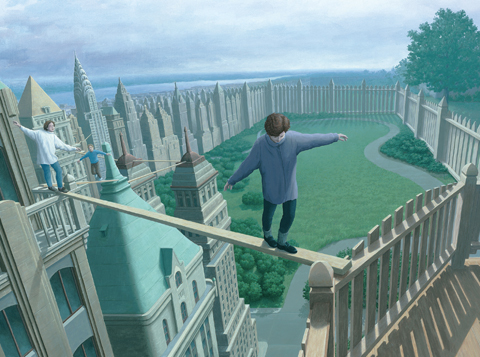 Knox and Kaela started to carry planks of wood up to their 35th-floor apartment. They used these planks of wood to make a bridge from building to building until they were at the last building at the edge of the city. Knox and Kaela, with the help of their younger cousin Drax, carried the longest piece of wood they could find up 35 flights of stoors, out their apartment window, and across the sky bridges throughout the city.

Shouts called from the ground below. They had been caught. Knox knew that it was now or never. If they were unable to reach the wall, the three would surely face life in prison, just like their grandfather. He quickly threw the plank of wood atop the decorative balcony of the apartment building. He lowered the other end to the wood onto the wall. Knox hurried across the wood. The three could hear the calls of the officers swiftly approaching.

Knox was the first to cross the fence surrounding Austerity, followed by Kaela and Drax. The three shoved the last plank of wood off the balcony just the officers rounded the building’s corner. They were free at last.

“No fair,” Kimly shouted from the other side of the jungle gym. “You guys always win.”

“Yeah,” Danny, their kindergarten neighbor, yelled after Kimly. “You’re so much bigger than we are. It’s not fair.”

“Maddox, Brie, Max, time for dinner,” Maddox and Brie’s mom called from the sliding back door. The three jumped from their wooden playset and ran toward the house.

“You just have to use your imagination to catch us, that’s all.”